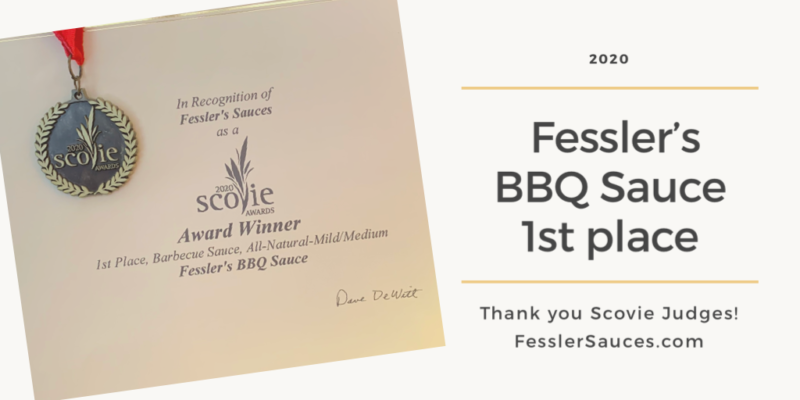 FOR IMMEDIATE RELEASE-Fessler’s win 3 Awards! The Scovie Awards Honor the Best Spicy & Savory Food Products and as a result, Fessler’s Sauces were one of the recipients.

All three of the winning products were applauded by the judges because of their great taste and all natural and gluten free qualities. Fessler’s products can be purchased online at FesslerSauces.com and have shipped to nearly every state, including Hawaii. Their products are also sold at many stores in SE Michigan and they also can be found at many festivals and events around the state. Fessler’s entire product line up includes: BBQ, Mustard and Hot Sauce. Peach, Cherry, Blueberry, Apple, mild and hot salsas and spice rubs in 5 flavors. In addition, Fessler’s Sauces were Scovie Award winners in previous years as well.

Dave DeWitt, founder of the Scovie Awards said the 2020 Scovie Awards Competition had 742 entries. This number was up from 676 in 2019, as a total of 142 companies entered products. The entries came from 32 states in the U.S. and 5 countries, including, England, Hungary, Germany, Croatia, and Australia.

The Scovie Awards Competition is produced by Emily DeWitt-Cisneros of Sunbelt Shows, Inc. and producer of the National Fiery Foods & Barbecue Show. The show is coming up this February 28, 29 & March 1, 2020. The Fiery Food Show will be held at the Sandia Resort and Casino in Albuquerque, New Mexico.